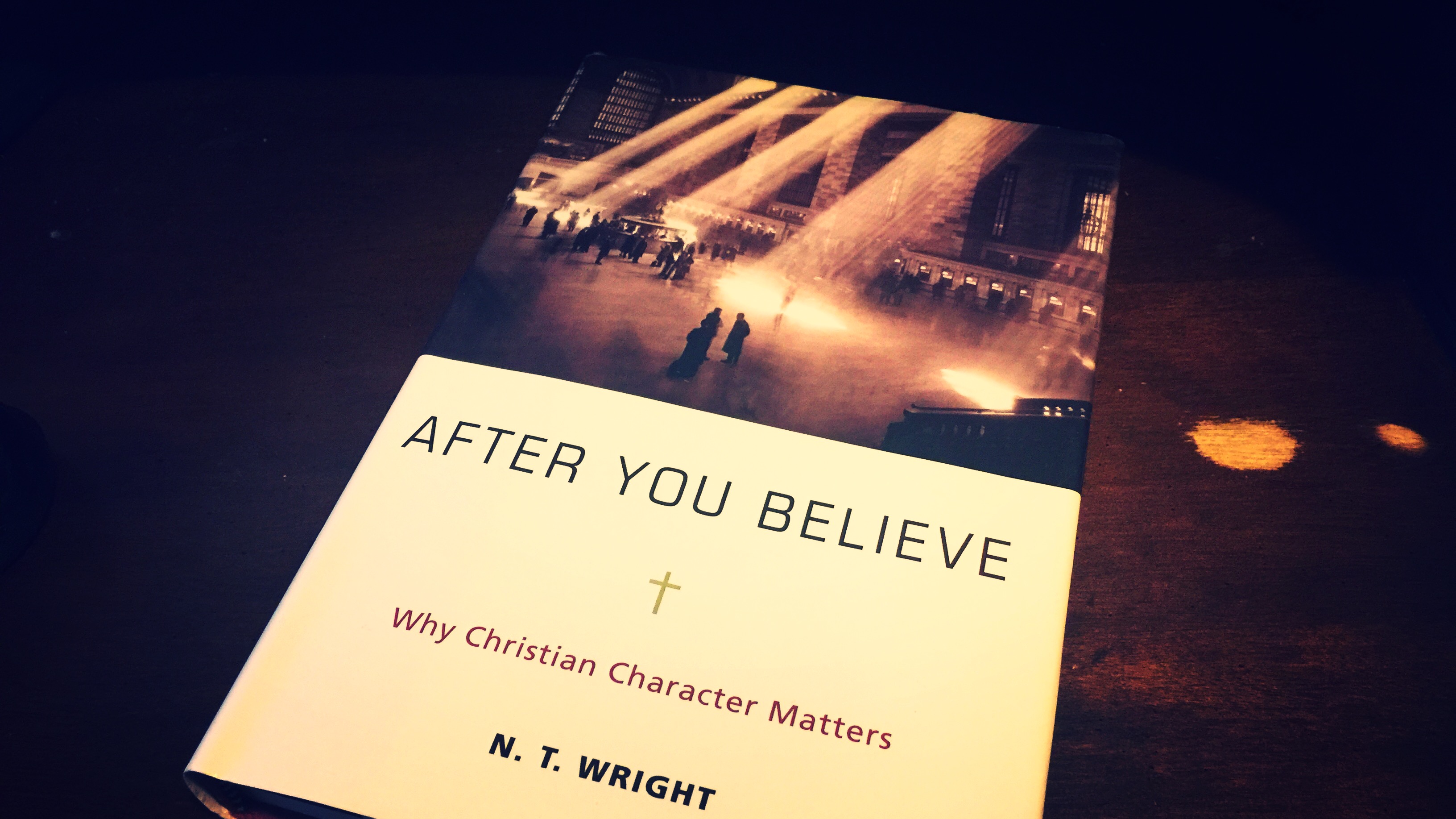 Thoughts on After You Believe

I’ve been working through N.T. Wright’s book, After You Believe for the Thoughts from Canaan book club (I know, I was supposed to finish it last month…). Although he doesn’t spend a lot of time discussing Revelation, he touches on it here and there.

In particular, he talks about the calling of humanity in chapter 3, Priests and Rulers. That calling, according to Wright, is to fulfill the original mandate given to Adam in Genesis 1-2: to rule the earth and to mediate between God and creation.

Wright argues that the whole of Scripture sounds this call again and again. And to make his point, he notes two important passages from the book of Revelation: the throne room scene in chapters 4-5 and the New Jerusalem in chapters 21-22.

He writes, “John’s vision of the heavenly host worshipping God and the Lamb in chapters 4 and 5 looks very much like…the kind of place where an emperor…would hold court, surrounded by his retinue”. He goes on to mention how the reign of Jesus portrayed in these chapters upends the reign of Caesar and all other secular monarchs.  Then, he say, “This is the true imperial rule, and it is exercised through the Lamb who was slain, and through his followers, who embrace his way of humility and suffering”(After You Believe, page 81).

This idea shines through most clearly in Revelation 5:9-10. In those verses, the four living creatures and twenty-four elders sing a new song to the Lamb:

“You are worthy to take the scroll
and to open its seals,
for you were slaughtered and by your blood you ransomed for God
saints from every tribe and language and people and nation;
you have made them to be a kingdom and priests serving our God,
and they will reign on earth.”

And with these words, Revelation proclaims the fulfillment of humankind’s calling as kings and priests. Though God created Adam and Eve for this purpose, they quickly failed. But in Christ, God both calls and empowers us to live as kings and priests, now and forever. This is a theme that surfaces several times in Revelation but which popular readings of the book often leave out. In Revelation, God reverses so much of the chaos that we see in the early chapters of Genesis.

If the first book of the Bible pictures a Paradise lost, the last book unveils a Paradise regained.

After discussing chapters 4-5, Wright skips straight to Revelation 21-22. In these last chapters, John records a vision of a new heavens, a new earth, and a new Jerusalem. He writes, “I saw no temple in the city, for its temple is the Lord God the Almighty and the Lamb” (Revelation 21:22). On this, Wright notes, “There is no specific Temple in this new city because the city itself is a Temple, or rather is the true Temple, the reality toward which the Jerusalem Temple had been pointing all along” (After You Believe, page 81). In other words, God now dwells with his people, just as he did with Adam and Eve in Eden.

And so the thoughts that Wright highlights in both sets of chapters come together. Humankind has received a calling. Jesus has made that calling possible. And it is now our privilege and responsibility, as Christians, to be the kings and priests that God desires.

What an incredible calling that the Book of Revelation reveals!

Walking on Streets of Gold?

When many Christians read about the New Jerusalem in Revelation 21-22, they assume it’s giving a detailed description of Heaven. They imagine walking on streets of gold, passing through pearly gates, etc. But one of the first things we must understand when reading Revelation is the fact that it speaks in symbols.

With that said, some people have gone to the other extreme and tried to tease out hidden meanings within each symbol – as if pearls mean one thing, emeralds another, and rubies still another. This approach is just as faulty as the former one.

I’ve always advocated for a middle road here. The picture John paints is a symbolic one. But it should be viewed as a whole rather than as a collection of individual parts.

N.T. Wright explains this better than I ever could:

“The description of the jewels and other adornments of the city echoes various biblical passages (including Exodus 26-28, 2 Chronicles 3, and Isaiah 60) in which the glory and beauty of God himself are present in, respectively, the wilderness tabernacle, Solomon’s Temple, and the new Temple of the messianic age. There is little reference to ‘beauty’ in the Bible, but such as there is is mostly directly linked to the glorious presence of God, both in the whole of creation and, specifically and sharply, in the ‘little world’ of the Temple and its adornments” (After You Believe, pages 81-82).

In other words, John is neither giving us a literal description of Heaven nor sending us an encoded puzzle to solve. He’s painting a picture of an indescribable reality – the glory of living in God’s presence – with things we can understand – valuable stones and metals.

Revelation Isn’t Just About the Future

Wright closes his discussion here with an important reminder. “We shouldn’t fail to notice that, in the book of Revelation as elsewhere in the New Testament, this ultimate destiny is anticipated in the present time. The vision of Revelation 5 is not a vision of the ultimate end…but of the heavenly dimension of present earthly reality” (After You Believe, page 82).

We ought to write that statement down and tape it to the first page of Revelation. For too long, folks have assumed this book is solely about the future. With this assumption, people have charted out the end times (quite literally) and even pinned dates to particular verses.

Revelation has just as much – if not more – to say about the present as it does about the future. This is not a time bound book. As the angel tells John in the last chapter, “Do not seal up the words of the prophecy of this book, for the time is near” (Revelation 22:10).

So let’s all stop trying to cover what God has revealed.

In chapter 4 of ‘After You Believe’, Wright says something I absolutely love. Rather than give a lot of commentary on it I’m going to leave it here as a closing meditation. After you’ve let it percolate for a little, leave a comment below and let me know what you think. Oh, and as you read – when he writes ‘Human’, just think ‘humankind’ or ‘man’.

The gospels, the epistles, and Revelation itself “work” only when you see them as detailed elaborations of the large, complex, but utterly coherent story we sketched earlier: the call of Human to be God’s image-bearer into creation, the call of Israel to be the rescuer of Human, and the vocation of Jesus to be the one who, completing Israel’s task, rescues Human so that, through redeemed humankind, the whole creation can be liberated from its corruption and death and the project of new creation decisively launched.

If you’d like to stay up-to-date with the latest articles, book reviews, and odd thoughts on Revelation, you can scroll down and subscribe to my semi-regular newsletter. I promise I won’t sell your e-mail or bug you all that often. So please, subscribe and keep in touch.

Next: What is Apocalyptic Literature? – Part 1 in ‘Approaching Revelation’

One thought on “Some Revelation-Related Thoughts from N.T. Wright’s ‘After You Believe’”